cadillac heaven - 'the golden one'

Like new! The restoration receipts exceed $46,000, it shows. The interior, finished in Buckskin Tan leather was an eye watering $18,000! Take a look, what a lovely place to be. The paint and bodywork added another $ 15,000! This is like a new car and driving it is sheer bliss, more than adequate power from the 8.2 litre V8 and no problem stopping courtesy of four wheel disc brakes.

In 1976 General Motors heavily promoted the Eldorado convertible as ‘’the last American convertible’’. Cadillac sold around 14,000 and many were purchased as investments. The last 200 were designated as ‘Bicentennial Edition’ to commemorate America’s 200th birthday.

Well, someone, no doubt in a suit, had a change of mind and Cadillac reintroduced the Eldorado convertible for the 1984 model year. Several owners of the ’76 model felt they had been deceived, (of course they had, it’s called ‘marketing’) so they launched a class action lawsuit against General Motors. They lost. It is doubtful they all deserted Cadillac for a Mercedes or a Lexus though, Cadillac owners generally love their cars, and justifiably so.

For the 1975 model year the ‘Eldo’ had received newly designed rectangular headlamps, full rear wheel openings without fender skirts and crisper lines which resulted in a much sleeker appearance, reminiscent of the 1967-70 models. So for 1976 there were only minor styling changes that included a new grille and revised tail lamp lenses.

Thankfully, the 500ci engine remained, that equates to 8.2 litre and this was the most favoured option over the 425ci which was only 7 litre (!) Fitted longitudinally but driving the front wheels this ultra-smooth 500ci V8 provides more than enough power to propel this 2.2 ton car in a manner befitting such a prestigious automobile.

This beautiful example is finished in the most striking Cadillac ‘Bright Red’ with interior and top in Buckskin Tan.

The ’76 Eldorado at almost 19 feet long and 6 feet 8 inches wide is a 24k Gold statement of style and prestige.

Of course, Elvis had one. 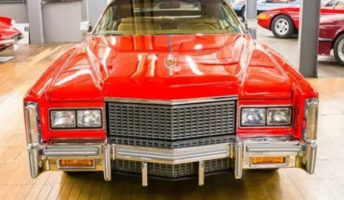 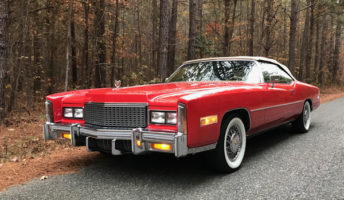 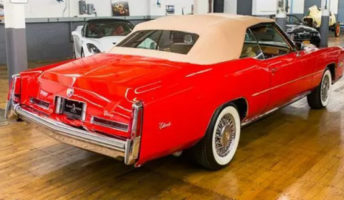 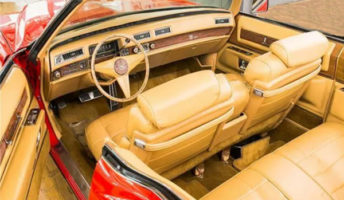 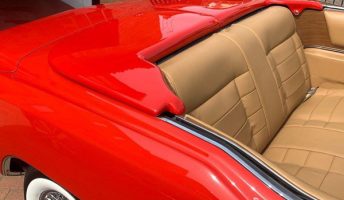