They say a stampede is louder than a heartbeat....

After introduction in late 1964 and body style changes for the ‘67-‘68 models, the ’69 –‘70 Mustangs were still considered to be ‘First Generation’, although they were both wider and longer than previous models.

The Mach 1 was introduced in 1969 and was a sales success. Changes in 1970 included dual beam headlights, with the ‘69’s inner headlights swapped out for Sport Lamps and recessed taillights on a black honeycomb rear panel. The ‘69’s side scoops behind both doors were removed. The intention was to make the ’70 model look less aggressive than the ’69. That didn’t work as sales were lower in 1970.

This 1970 example was subject to a rotisserie rebuild and included a bare metal repaint. The Cleveland 351 ci (5.8 litre) V8 4-valve engine and FMX Auto gearbox were both rebuilt, as were steering and suspension. The ‘M Code’ version had a hydraulic cam, a higher compression ratio at 11.0:1 and produced 300 BHP. This option cost $48 back in the day, and 10,790 1970 Mach 1’s were produced with the M Code upgrade and FMX gearbox. Of course it goes without saying that Power Steering and Power Disc Brakes were included in the specification, but we have said it anyway.

Upgrades include LED headlights and Dakota Digital Instruments. Finished in Wimbledon White with a white interior, tinted glass and Magnum 500 wheels this truly iconic Mach 1 looks as good as it sounds, and it does sound good.

Sorry, No Part Ex, cleared funds required before you spin the wheels! 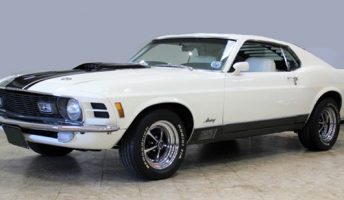 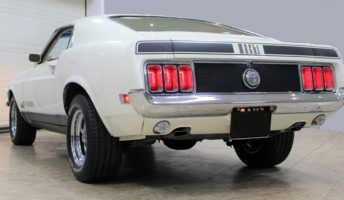 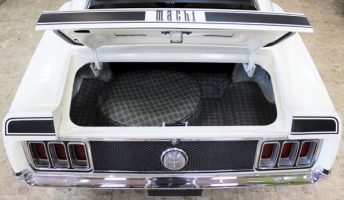 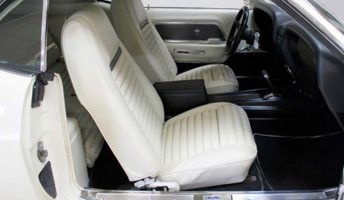 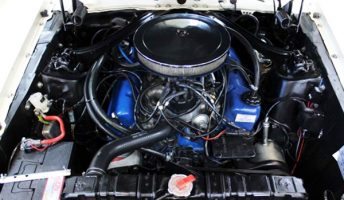 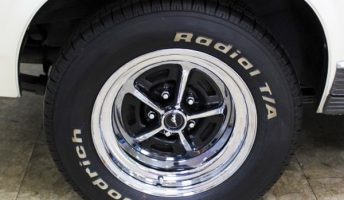